Bridges: Voices From Israel/Palestine A Play Reading by Christine Benvenuto 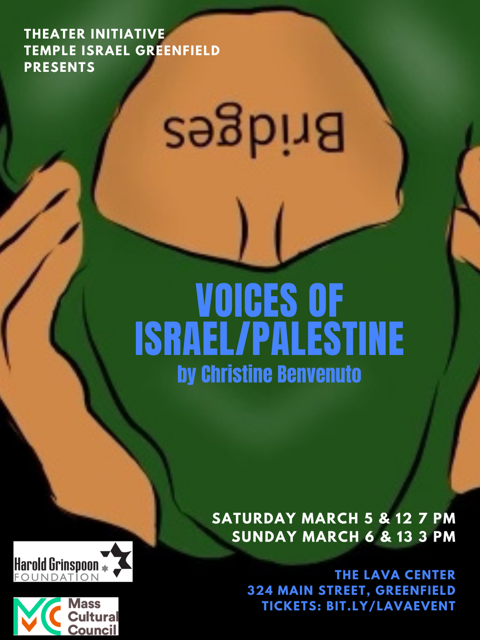 Temple Israel and The LAVA Center host performances of Bridges, a play about the Israeli-Palestinian conflict.
WHAT: Bridges, written by Christine Benvenuto, directed by Jan Maher, part of LAVA’s Social Justice in the Arts and Media series
WHEN: Saturday, Mar. 5, 7 p.m.; Sunday, Mar. 16, 3 p.m.; Saturday, Mar. 12, 7 p.m.; Sunday, Mar. 13, 3 p.m.; also available online on-demand
WHERE: The LAVA Center, 324 Main St., Greenfield; also available online
Details: https://localaccess.org/social-justice-in-the-arts-and-media/
Tickets: https://thelavacenter.eventbrite.com/
CONTACT: [email protected] or ‪413-376-8118‬
Greenfield, MA — The LAVA Center is proud to present Bridges, written by Christine Benvenuto and directed by Jan Maher, as part of its Social Justice in the Arts and Media Series. The play is produced by Theater Initiative of Temple Israel.
In the West Bank and in Israel, the traumas of occupation are inescapable. Clinging to hope or overwhelmed by despair, these Israelis and Palestinians are determined to make their stories heard. Written by Christine Benvenuto and partially drawn from verbatim transcripts of Compassionate Listening sessions, Bridges is produced by Theater Initiative of Temple Israel.
Playwright Christine Benvenuto is the author of two works of nonfiction published by St. Martin’s Press, and her stories and essays have appeared in many newspapers and magazines. Her plays have been performed at the Boston Theater Marathon and online. A short story version of the first act of Bridges is forthcoming in an anthology from Michigan State University and another play is forthcoming in an international anthology to be published in London.
Director Jan Maher lives in Greenfield, MA with her husband Doug Selwyn where she is a co-coordinator of The LAVA Center. Her directing credits include Cascando by Samuel Beckett, featuring Joseph Chaikin (Empty Space Theater, Seattle, WA) and her own play Widow’s Walk which was a finalist in the Actors’ Theatre of Louisville 10-minute play contest and won Best of Week Four in Seattle’s New City Theater’s Directors’ Fest. Her novels Earth As It Is and Heaven, Indiana and short story collection The Persistence of Memories have all been designated as Kirkus Reviews Best Books.
Each performance will be followed by a facilitated discussion about the social justice issues brought up by the play. The schedule of the facilitators is as follows:
Saturday, Mar. 5: Norbert Goldfield MD is founder/ CEO of Healing Across the Divides, which focuses on peace-building through health in the Israeli-Palestinian conflict, and founder/CEO of Ask Nurses and Doctors or AND, that organizes local health care professionals in support of health reform and universal coverage. His latest book is Peace Building through Women’s Health: Psychoanalytic, Sociopsychological, and Community Perspectives on the Israeli-Palestinian Conflict (Routledge, Taylor Francis, 2021).
Sunday, Mar. 6: Court Dorsey is a theater artist, writer and conflict resolution specialist, who has performed with numerous ensembles in venues across North America and in Europe. He is currently writing a new play, Swamped, which he hopes to produce this spring at The Wendell Meetinghouse, a venue he is renovating with other community volunteers.
Saturday, Mar. 12: Yael Petretti has been a practicing Compassionate Listening facilitator for over twenty years, leading workshops, listening delegations abroad and domestically to bring people together. The work is to humanize the “other,” to melt hard or frightened hearts and to connect in heart-felt ways.
Sunday, Mar. 13: Andrea Cohen Kiener led citizen delegations to the West Bank, Gaza and Israel. She is a trained Compassionate Listening facilitator and is the rabbi at Temple Israel Greenfield.
The play performances will be available both in-person and online. Reserve tickets for either for a donation of your choice ($5-$10 suggested; $1 minimum). Seating will be limited. Everyone who comes into The LAVA Center to see a play or presentation must show proof of Covid vaccination upon entry. Reservations can be made at https://thelavacenter.eventbrite.com.
Major Funding Provided by the Harold Grinspoon Foundation. This program is supported in part by a grant from the Greenfield Cultural Council, a local agency supported by the Mass Cultural Council, a state agency.